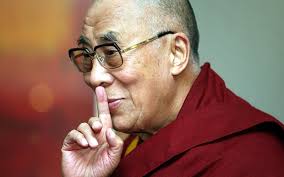 The Dalai Lama stunned liberals saying there are far too many Muslim migrants pouring into Europe, warning against the continent becoming Arabised, and claiming the solution is the “repatriation,” or deportation of Muslim migrants.

His comments earned an angry rebuke from a top Obama adviser.

Agence France-Presse has reported that the leader of Tibetan Buddhism said: “When we look at the face of each refugee, but especially those of the children and women, we feel their suffering, and a human being who has a better situation in life has the responsibility to help them.

“But on the other hand, there are too many… in Europe, Germany in particular, cannot become an Arab country, Germany is Germany”.

“There are so many that in practice it becomes difficult.”

The Dalai Lama added that “from a moral point of view too, I think that the refugees should only be admitted temporarily”.

“The goal should be that they be returned to help rebuild their countries.”

His comments are almost the same as those made by Europe’s anti-Islamisation PEGIDA movement, and similar to comments made by groups like France’s Front National, Germany’s Alternative Fur Deutschland, and to a lesser extent, Britain’s UK Independence Party.